A few weeks back, we shared the experience of one of our recent Creeking Clinic students, Nell. We’re excited to have additional feedback from one of our other students, Joni, who faced some big fears in a big way during our weekend on the water. As always, we love getting feedback from the people we get to paddle with to learn more about what they take away from our time together on the water. Joni’s reflection is a testament to the huge pay off (and thrill!) that lie on the other side of many of kayaking’s biggest obstacles. Enjoy her take on creeking and overcoming fear!

It is often said that fear is good.  It keeps you alert.  It makes you work harder or smarter. Sometimes fear keeps you alive!  But it is also said that too much of a good thing can be bad.  When it comes to kayaking on white water, I think I have too much of a good thing.   You see, I have been known to have so much fear that I freak out.  Unfortunately, freaking out can get you in big trouble in white water.

I don’t know why I’m so fearful at times.  I grew up swimming.  I still swim regularly and I like to think that I’m a strong swimmer.  But when water starts pushing me around, I realize just how vulnerable I am.  That vulnerability puts me in “freak out mode” and I don’t know how to control it.  Maybe I inherited it.  I come from a long line of Italians and it seems like the women in my family are really good at instilling fear.  Being told to be careful crossing the street is fine when you’re five years old, but when you’re 16 and you still get the warning, you begin to think that maybe something really is out there just waiting to get you!   “You shouldn’t drive so far, it’s too dangerous!”   “Don’t run so much.  You’re going to give yourself a heart attack.” “Don’t swim so much.  You’ll end up looking like a prune.”  Fortunately for me, I had my father and my grandfather to counter these negative messages.  In fact, I still recall when my father told me, “Joni, you don’t always have to listen to your mother and your sister.”  Wow!  It was such a relief to learn that he also felt that some of their warnings were off the wall.  Thanks, Dad!

My father instilled in me a desire to succeed in tasks that I was told I could not do.  Of course, fear of failure came with it.  So if I was told I shouldn’t swim so much, I swam more.  In my generation, girls weren’t encouraged to pursue careers in mathematics, so I chose to teach college mathematics for my career.  If I was told I was too small and weak to lift something, I was bound and determined to lift it.  Fortunately, I had my dad and (occasionally my mom), supporting me in my endeavors.

So here I am, several decades later.  I discover white water kayaking and I know exactly what my mother would say.  Every time I push off from shore, I can hear her whispering in my ear, “You can’t do this!  You’ll kill yourself!”  Yet I know that with enough practice, with enough “Butt-in-boat” time, things that I can’t do now, I will do if I practice enough.  That is one of the things I love about kayaking.  Things that once seemed to be impossible become easy and fun to do.  It takes work.  It means that I must face fear, a little at a time.   With kayaking, there are always new challenges, so there is always something to work on.  It parallels life in a lot of ways.

That is why I said yes, to my significant other, Tim, when he popped the question, “Do you want to take a creeking class with Chris Wing?”   “And who is Chris Wing?” I ask.   Tim replied that he had met Chris at the Whitewater Center in Charlotte, North Carolina, two summers ago.  Tim then directed me to some of Chris’ videos on YouTube.

“Do you think I can do it?”  “Where will we be paddling?”   “I need to see some YouTube videos of the water he will take us on before I decide.”  So we go back and forth for a few days with YouTube videos of the French Broad, Tim emailing Chris and me reading the description of the class.  Tim and Chris engaged in an extended dialogue regarding class expectations.  I was copied on their conversation.  I decide to commit to the class.  Immediately, the fear set in. 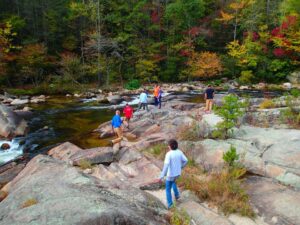 On Saturday morning, I met our instructors, Chris Wing, Sam Fulbright and Lydia Cardinal.  Now I call them the H2O Dream Team.  We also met with the other members of the class at the put-in on the French Broad River.  The class was fantastic.  I learned to read the river and lead others down a stretch of a river that I had never been on.  That was a big step up for someone, like me, who prefers to always follow someone with more experience.  We practiced rolling in shallow water.  We laughed our way down the river, drinking in the beautiful scenery and wondering what it would be like to live in one of the homes, located high on the bluffs overlooking the river.

Everything seemed to be going well and my fears were at bay until we came to a larger rapid.  I missed my line and I got pinned against a rock.  My head was out of the water, but I still wanted to pull my skirt.  I knew I was going into “freak out mode”.  But I didn’t!  Sam caught my attention and told me to hold on.  To my amazement, Sam jumped onto the rock against which I was pinned.  Immediately he started putting me at ease.  Sam told me to relax, breath and then directed my boat back into the rapid.  Tim and I were both impressed at how Chris and Sam, who appeared to be hanging out in the background, always managed to be there when needed.  Later, Chris spoke with me about what had happened and, more importantly, he acknowledged that my fear was normal.  It was ok to have the fear and still go on.  I wasn’t a failure, I just learned that I need to have my boat angled more upstream when I come to a strong rapid like the one that I had just run.  Although I was shaken, I felt confident enough to go on.

The group ate lunch and we watched Chris do some boofs.  Everyone from our group was getting in their boats and doing the first boof.  Sam and Chris were already out on the water, watching and helping others.  It was my turn to get in my boat, but I was afraid to do the boof.  I guess I was still a little shaken from being pinned.  I turned to Lydia, reverting to my “freak out mode”.  She told me to voice my fears and she listened.  We looked at what the worst case scenario could be.  We looked at all the different routes I could take if I didn’t want to boof the drop.  She left it up to me to decide which route to take.  I hate making decisions when I am scared, but having me make the decision was good for me.  I chose to try the boof since Sam was right below and could help out if I ended up swimming.  I couldn’t believe how easy it was!  In fact, I repeated the boof.  We continued down the river, boofing, peeling out, catching eddies behind rocks, and learning to communicate with our group.  Communicating with my group was another hard part for me, but I managed to do it even though it was a little rough at times.

We finished up in the late afternoon.  Chris didn’t tell us where we were going on Sunday, but he promised that it would be something everybody in the group could handle.  Also, he said there would be some steepness to our Sunday paddle.  Why is it that I always think I am the exception?   “Will I be able handle the Sunday paddle?”  “Did he say steep?”  “Is he sure I can handle this Sunday paddle?”  My fears were totally unfounded.  Sunday was amazing!  We paddled Wilson Creek.  Even with low flow, the creek was steep, tight and technical.  I had never experienced that kind of paddling before.  Clear communication with our group was essential, as was scouting.  The rocks were big and beautiful and the water was clear.  The slides started out small.  So by the time I got to “10 Foot Falls”, I was ready to do it.  That, in itself, was unbelievable.  The fact that I agreed to go down a 10 foot drop was quite an accomplishment.  What a great experience.  I’m looking forward to paddling with Chris, Sam and Lydia again.  The only regret I have is that I don’t live in North Carolina so that I could paddle the H2O Dream Team more often.