The rain brings gifts. Driving to the put in for the Rocky Broad in downpour last week, I chuckled by thinking to myself we are a rare breed that ponies up for adventure as soon as the weather turns sour; in fact, we spend a lot of time hoping for crap weather so we can go outside and play. I can’t think of many other sports that relish in radar maps quite the way we do.

Watching rivers fall in and out of favor as rain moves in is a double edged sword for me. The plus? I love to kayak. I’d rather be outside, playing, and using my body above just about anything else, any day of the week. The drawback is the possibility of suddenly having to choose between bucking up and doing something new, hard, and scary or sitting inside my warm, dry house where everything is safe, happy, and predictable. The thrill we love versus the comfort we crave… a delicate balance.

I haven’t been kayaking very much lately. My old desk job sucked me dry of much of my motivation and grit, and my desire to charge got tucked away in a dusty corner. When the Rocky Broad came in with the rain, I suddenly found myself at the very obvious crossroads of no energy and no motivation meeting rare opportunity and, well, one of the reasons we moved to the mountains to begin with: the backyard run. The Rocky Broad is about 30 minutes up the road, so we loaded the truck up and made our way to the put in as my joints and brain creaked with months of lethargy. Did I want it? My grit had fallen to pallor under fluorescent lighting and recycled air.

Sliding into the muddy river, I could feel the charge beneath the surface and realized quickly I could not move downstream with lukewarm intent. The river was high and while there were still eddies and the run is roadside, the flow mixed with my unfamiliarity demanded respect and focus. Nevertheless, I soon found myself enjoying the quick pace and yeah, a bit of the chaos, too. But this river was fast and demanding, and after the energy spent on a portage, the shortcomings in my paddling fitness were growing more and more apparent; my months out of the boat and at a desk were hounding my sharpness on the water. Before committing to the next crux section on waning energy, I decided to hop out by taking advantage of the Rocky Broad’s roadside nature. Waiting for shuttle under the covered bridge, I peered downstream at the brown water disappearing in convoluted channels, behind boulders, and around the bend, wondering what I was missing. I felt good on the water, competent though not yet strong again, but reminded of the power in taking to the river often; I also felt secure in my awareness of my place on the water. To have this playground in my backyard was a gift, and I knew I’d be back for second helpings some time in the future.

In the throes of Redneck Falls. Photo: Chris Wing

I didn’t know ‘the future’ would be just a few days later, after the river had roosted up and down and finally hit a friendlier level of about four feet. The put it was now clear, sunny, and visibly calmer than I had seen it days before. We were paddling under the shadow of Chimney Rock the whole way down, with blue skies and a warm fall breeze to boot. Having the higher water experience under my belt made the section above Redneck Falls quick and fun as I marveled at how water makes this or that harder or easier; mostly, I had a lot more time to make decisions and recover, even if lines were a bit tighter. When we got down to Redneck Falls, I knew I would at least want to hop out for a look as I had walked it previously and not gotten a good look at the main line. Our friend Tyler got out and chatted the rapid with me while Chris demoed the line, and I tried my best to keep my crazy neuroses about worst-case-scenarios under wraps, both for my sake and Tyler’s. Though the rapid is a bit tricky and certainly intimidating, I saw the line right away and couldn’t deny the unmistakable burst of adrenaline that only meant I knew I could run the rapid. It had been a while since I’d bucked up and did the scary thing, and I almost forgot what it was like to force my shaking knees into my thigh braces and power out of the eddy. Tyler went first and gave the all clear, leaving me in the staging eddy, alone. I could see Chris on safety and I understood the line, if not the power of the water entirely. I crept out of the eddy and dropped into the crux of the rapid, making the initial move but underestimating the force of the current and the kick of the water, so I had to make the most out of a new, plan B line, but it worked out. I met Tyler at the bottom and soon, Chris, and was pleasantly reminded of the charge the river provides. 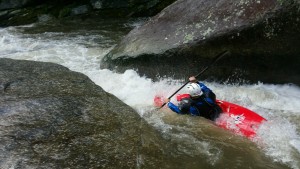 The Rocky Broad was challenging. I continued down past where I had taken out at high water, and the river indeed increased in demand. I had some great lines, and I had some not so great lines, but it felt incredible to be back on the horse and pushing myself. This river required improvisation, some of which I did more gracefully than at other times, but the juice was worth the squeeze. This classic whitewater is a tremendous training ground and rewards bold precision; in that, I have room to grow.

Nearing the take out, the river grades out a bit and opens up. We caught this run during the only day of sunshine we’ve had in nearly two weeks, and we were blessed with incredible views and spotlit water the whole way down. I was exhausted from being ‘on,’ as you say, the entire day; certainly, even the mellower parts of the river require your attention. I popped my skirt with that feeling of running-on-empty satisfaction from leaving it all out on the water. This backyard run provides.