“Ohio?” is the typical response I get when I tell folks where I started my kayak career close to 12 years ago. Little do folks know there are not only whitewater rivers in Ohio but also a die hard community of paddlers that surround those rivers. But let us be honest, most folks in Ohio have an undying love for their region, you just have to first dig through some of the melancholy of being from a state filled with quirky history and degenerate sports teams.

I frequently find myself retelling the story of how I got my start in this odyssey that is whitewater paddling, and yes, frequently I have to explain just how this is possible in Ohio. Ohio has gradient and is unlike many of the cliche descriptions of corn filled fields, though that exists too. Many of these geological anomalies were a result of the advance and retreat of glaciers from the last ice age, and though Ohio is not considered to be a whitewater destination by many, it has its fill of whitewater from class I-V. It is on one of these sections of rivers that I first dipped my blade into the maniacal currents that fill our rivers, and ultimately it was this section of river that I still look back upon fondly. I of course am referring to the most famous of all Ohio rivers, the Cuyahoga- Iroquois for “crooked river.” 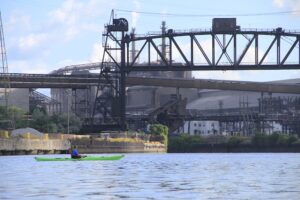 The Cuyahoga River became most famous for a series of fires that occurred in the 50’s and 60’s and became the motivation that many environmental activists needed to help spur the clean water movement. Though the Cuyahoga was not the only river to have a checkered industrial past, or even to have fires on its surface, the right pieces were in place to use it as an emblem that would forever be associated with the Clean Water Act of 1970 and the formation of the Environmental Protection Agency. The river has come a long way since these years of terrible abuse, and it still has a long way to go, although it seems that a very motivated and organized community of activists and recreational users have been riding on a wave of positive momentum and progress once again.

Late in 2011 I received a phone call from close friend David Hill… “they’re taking the dams out.” Dave was referencing 2 of 3 dams that currently still stand on the Cuyahoga River in Cuyahoga Falls. The city won a grant and the funding fell into place, and surprisingly, very few folks had anything negative to say about it. The usual concerns were expressed such as who will be paying for it, but the City of Cuyahoga Falls located the funds and the project managers to get such a project underway. I must of course mention that these dams, as well as the dams in Kent and Munroe Falls which have already been removed, are part of an Ohio EPA initiative to recuperate the water quality of the Cuyahoga River. Want to learn more about water quality and the EPA, click here. 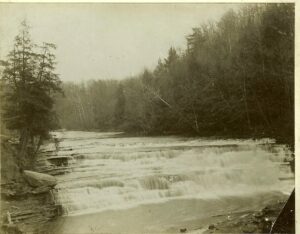 This was a very exciting time for the folks in Northeast Ohio, myself included. We have all been left wondering what lies beneath the dam pools on this section of river in Cuyahoga Falls. Even more so, what lies beneath the dam pool behind the biggest insult to the Cuyahoga River, the 60 foot monstrosity that is the Ohio Edison dam, just downstream of the other two. Underneath the pool of water the namesake “Great Falls of the Cuyahoga” currently lie dormant- asleep- but forever waiting to show its wonderful face again. Incidentally, this may become a reality sooner than anyone ever thought as the mayor of Cuyahoga Falls, Don Robart, announced an ambitious goal of not only removing the two small dams this fall, but also the Ohio Edison dam in the next five years! This is the first realization of a free flowing Cuyahoga River from Lake Rockwell to Akron in well over one hundred years!

These are exciting times to be a paddler and an Ohioan seemingly, and with previous talks with David 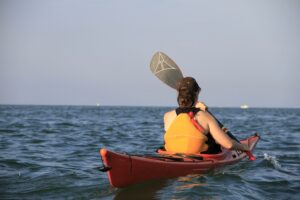 Hill about the possibility of filming a documentary from a recreational standpoint, I realized this would be the year to do so. I pitched the idea to Sam Fulbright of Pilot Collective Media as a collaboration of my story telling and his keen eye behind the lens. He liked it and so did I; now all I had to do was find funding for us to have the necessary equipment, time and travel expenses. Wave Sport has been absolutely pinnacle in making this happen and I continue to be blown away at the support that Confluence Watersports and Wave Sport have provided me and my projects.

As of this week, we wrapped up filming in Ohio. We re-visited many of my old friends, locations and experiences that I had the unique pleasure being a part of as I grew as a paddler, enthusiast and steward. This was the first trip back to Ohio in a long time where I felt I was coming home, and this project has been extremely well received in the community. After Sam and I started digging in, we started to uncover so many different angles and stories we could potentially tell.  I do believe you will see more stories with this area in mind beyond this project. We have a very long ways to go to save our rivers and make our fresh water sources fishable, swimmable and ultimately drinkable.

We had an ungodly schedule from day one. After driving through the night and sleeping a few hours, we began filming and never really stopped until the time that we left 5 days later. Sam Fulbright is quickly becoming a master of his craft and I trust him behind the lens to help tell the story that I hope to convey to 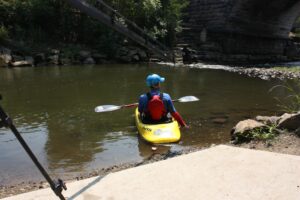 the viewers. Lydia Cardinal kept our child like demeanors in check and had the unfortunate task of running the errands and hauling the extra gear. There was one day I told her to never accept a job as a key-grip, and when asked what a key-grip was, I responded, “what you are doing right now.” Thankfully she has been involved in this process as I can go to her and tell her what it is that I am trying to do, and she has a way of making sense out of my nonsense. I think altogether we made a pretty good rag tag production team, and I think it will be obvious once the final production is complete.

I now have been tasked with sitting down with roughly 6-8 hours of raw footage to tell a 30 minute story. I am not envied I am sure, but I look forward to reliving these days over again. Post-production begins soon and we intend to put the final production into several film festivals in the next year. Look forward to sharing this with everyone soon. Photos by Lydia Cardinal and Sam Fulbright.